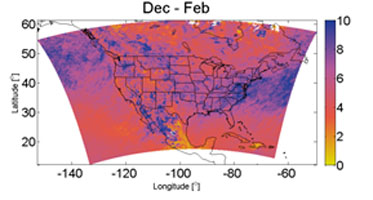 Abstract:The Wavelet Variability Model (WVM) for simulating solar photovoltaic (PV) powerplant output given a single irradiance sensor as input has been developed and validated previously. Central to the WVM method is a correlation scaling coefficient (A) that calibrates the decay of correlation of wavelet modes as a function of distance and timescale, and which varies by day and geographic location. Previously, a local irradiance sensor network was required to derive A. In this work, we determine A from cloud speeds. Cloud simulator results indicated that the A value is linearly proportional to the cloud speed (CS): A=1/2*CS . Cloud speeds from a numerical weather model (NWM) were then used to create a database of daily A values for North America. For validation, the WVM was run to simulate a 48 MW PV plant with both NWM A values and with ground A values found from a sensor network. Both WVM methods closely matched the distribution of ramp rates (RRs) of measured power, and were a strong improvement over linearly scaling up a point sensor. The incremental error in using NWM A values over ground A values was small. The ability to use NWM-derived A values means that the WVM can be used to simulate a PV plant anywhere a single high-frequency irradiance sensor exists. This can greatly assist in module siting, plant sizing, and storage decisions for prospective PV plants. 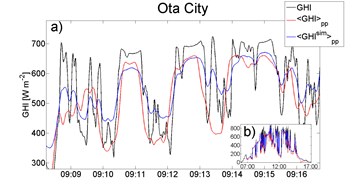 Abstract: A wavelet variability model (WVM) for simulating solar photovoltaic (PV) power plant output given a single irradiance point sensor timeseries using spatio-temporal correlations is presented. The variability reduction (VR) that occurs in upscaling from the single point sensor to the entire PV plant at each timescale is simulated, then combined with the wavelet transform of the point sensor timeseries to produce a simulated power plant output. The WVM is validated against measurements at a 2MW residential rooftop distributed PV power plant in Ota City, Japan and at a 48MW utility-scale power plant in Copper Mountain, NV. The WVM simulation match the actual power output well for all variability timescales, and the WVM compares well against other simulation methods. 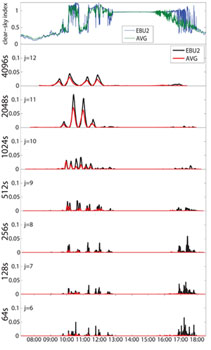 Abstract: Using six San Diego solar resource stations, clear-sky indices at 1-sec resolution were computed for one site and for the average of six sites separated by less than 3 km to estimate the smoothing of aggregated power output due to geographic dispersion in a distribution feeder. Ramp rate (RR) analysis was conducted on the 1-sec timeseries, including moving averages to simulate a large PV plant with energy storage. Annual maximum RRs of up to 60% per second were observed, and the largest 1-sec ramp rates were enhanced over 40% by cloud reflection. However, 5% per second ramps never occurred for a simulated 10 MW power plant. Applying a wavelet transform to both the clear-sky index at one site and the average of six sites showed a strong reduction in variability at timescales shorter than 5-min, with a lesser decrease at longer timescales. Comparing these variability reductions to the Hoff and Perez (2010) model, good agreement was observed at high dispersion factors (short timescales), but our analysis shows larger reductions in variability than the model at smaller dispersion factors (long timescales). 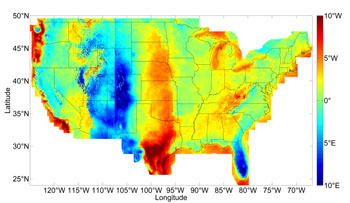 Abstract: Optimum tilt and azimuth angles for solar panels were calculated for a grid of 0.1° by 0.1° National Solar Radiation Database (NSRDB-SUNY) cells covering the continental United States. Optimum tilt and azimuth angles varied by up to 10° from the rule of thumb of latitude tilt and due south azimuth, especially in coastal areas, Florida, Texas, New Mexico, and Colorado. The yearly global irradiation incident on a panel at this optimum orientation was compared to the solar radiation received by a flat horizontal panel and a 2-axis tracking panel. Compared to global horizontal irradiation, irradiation at optimum fixed tilt increased with increasing latitude and by 10% to 25% per year. Irradiation incident on a 2-axis tracking panel in one year was 25% to 45% higher than irradiation received by a panel at optimum fixed orientation. The highest increases in tracking irradiation were seen in the southwestern states, where irradiation was already large, leading to annual irradiation of over 3.4 MWh m-2. 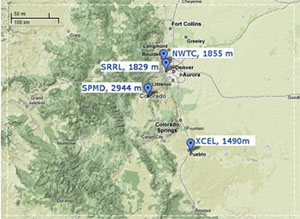 Abstract: Solar Global Horizontal Irradiance (GHI) fluctuates on both short (seconds to hours) and long (days to months) timescales leading to variability of power produced by solar photovoltaic (PV) systems. Under a high PV penetration scenario, fluctuations on short time scales may require a supplementary spinning power source that can be ramped quickly, adding significant external cost to PV operation. In order to examine the smoothing effect of geographically distributed PV sites, GHI timeseries at 5 min resolution at four sites across the state of Colorado were analyzed. GHI at the four sites was found to be correlated due to synchronous changes in the solar zenith angle. However, coherence analysis showed that the sites became uncorrelated on time scales shorter than 3 h, resulting in smoother average output at short time scales. Likewise, extreme ramp rates were eliminated and the spread in ramp rate magnitude was significantly reduced when all four sites were averaged. Nevertheless, even for the averaged output, high frequency fluctuations in PV power output are relatively larger in magnitude than fluctuations expected from wind turbines. Our results allow estimation of the ancillary services required to operate distributed PV sites.

Abstract: Ota City, Japan and Alamosa, Colorado present contrasting cases of a small rooftop distributed PV plant versus a large central PV plant. We examine the effect of geographic smoothing on the power output of each plant. 1-second relative maximum ramp rates are found to be reduced 6-10 times for the total plant output versus a single point sensor, though smaller reductions are seen at longer timescales. The relative variability is found to decay exponentially at all timescales as additional houses or inverters are aggregated. The rate of decay depends on both the geographic diversity within the plant and the meteorological conditions (such as cloud speed) on a given day. The Wavelet Variability Model (WVM) takes into account these geographic smoothing effects to produce simulated PV powerplant output by using a point sensor as input. The WVM is tested against Ota City and Alamosa, and the WVM simulation closely matches the distribution of ramp rates of actual power output. 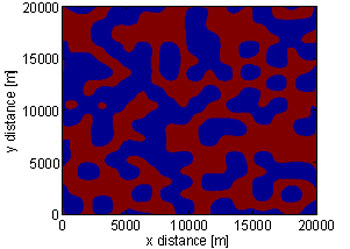 Abstract: A wavelet variability model (WVM) for simulating solar photovoltaic (PV) powerplant output given a single irradiance sensor as input has been developed and has tested well against powerplants in Ota City, Japan and Copper Mountain, Nevada. Central to this method is a correlation scaling coefficient (A) that calibrates the decay of correlation as a function of distance and timescale, and varies by day and geographic location. For Ota City and Copper Mountain, this A value has been determined using the network of irradiance sensors located at each powerplant. However, for applying the WVM to arbitrary locations where an irradiance sensor network is not readily available, it is necessary to estimate the A value. In this paper, we examine the dependence of A values on wind speed (at cloud altitude) and cloud size using a simple cloud motion simulator. 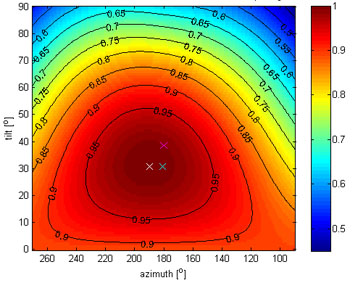 Abstract: Optimum orientations for mounting solar PV panels considering energy prices were found for California using irradiance data from the SolarAnywhere database and day-ahead market prices from the California Independent Service Operator (CAISO) Open Access Same-time Information System (OASIS). Results show that the optimum azimuth based on revenue is up to over 10° west of the optimum azimuth based on maximum energy output. However, the revenue is not very sensitive to changes in tilt and azimuth, and installing a panel within 10° of optimum generally results in 95% of the maximum revenue for most sites. 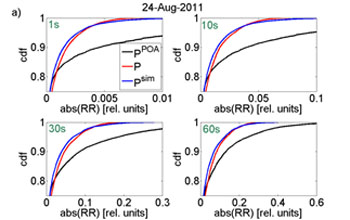 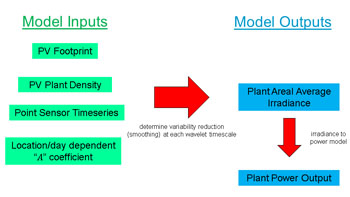 Describes a wavelet variabilty model (WVM) for simulating solar powerplant variability based on a singe input point sensor.
Journal article describing the WVM method in detail has been submitted (Nov. 2011) and will be posted once reviewer comments have been received and addressed. 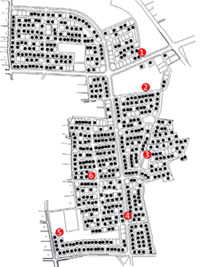 Abstract: This report describes in-depth analysis of photovoltaic (PV) output variability in a high-penetration residential PV installation in the Pal Town neighborhood of Ota City, Japan. Pal Town is a unique test bed of high-penetration PV deployment. A total of 553 homes (approximately 80% of the neighborhood) have grid-connected PV totaling over 2 MW, and all are on a common distribution line. Power output at each house and irradiance at several locations were measured once per second in 2006 and 2007. Analysis of the Ota City data allowed for detailed characterization of distributed PV output variability and a better understanding of how variability scales spatially and temporally. For a highly variable test day, extreme power ramp rates (defined as the 99th percentile) were found to initially decrease with an increase in the number of houses at all timescales, but the reduction became negligible after a certain number of houses. Wavelet analysis resolved the variability reduction due to geographic diversity at various timescales, and the effect of geographic smoothing was found to be much more significant at shorter timescales.